Not a Drop to Drink 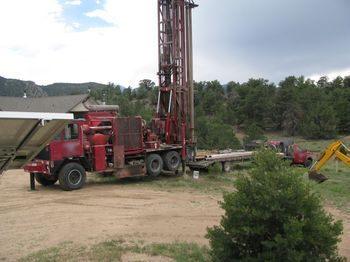 The Western U.S. has been in a decade long drought. Not enough moisture and higher average temperatures. In the cities you don't really notice except for those pesky watering restrictions.

In the country - especially the Rockies - you notice a lot. The unrelenting spread of the bark beetle killing millions of pine trees - first lodge pole pine, then ponderosa, and now moving into the pinon pine. With millions of dead trees, low moisture and high temperatures - wildfires were sure to follow.  A few years ago we experienced it all up close and personal.

Although the High Desert Homestead is a new place in a different location, related events seem to occur in threes. Dead forests due to pine beetle, wildfires - what was left?

A severe drop in water tables. The original well at the homestead was only 5-6 years old. As mountain wells go, it was a high producer. Less than 200' deep with a static water level of 75', it was tested at over 12 gallons per minute. For the first year we were here we never gave it a second thought - once a kick-a** well, always a kick-a** well - wrong!

In Mid-Summer of the following year we noticed the well pump seemed to be drawing a lot of air in with the water. Over a period of a few weeks the ratio of water/air started leaning heavily toward the air side. We had the original well driller come up to consult. He said a LOT of wells in the area were going dry - but before we did something drastic such as re-drill or drill a new well, we should put in an inside water tank and pressure pump - let the well pump fill the tank as best it could and draw off of the tank instead of directly from the well.  Costly, but a lot cheaper than doing a new well.

Even though the above would mean adding another high-powered pump into the system (not a good thing when on solar), we moved forward with that idea with the hope the low water table was a Mid-Summer thing.  It was not to be that simple.

In fact, it only took a week to realize the well was going dry quickly - every day the water/air ratio made it very obvious a more radical solution was necessary.

The well driller said there was a 50/50 chance he could pull all the old well casing (without it breaking and make starting a brand new well the only option).  That means we would be starting at the depth of the old well thereby reducing the cost.  The driller said we should plan on being without the well at all for 5 days if all went without a hitch.  We had no choice. 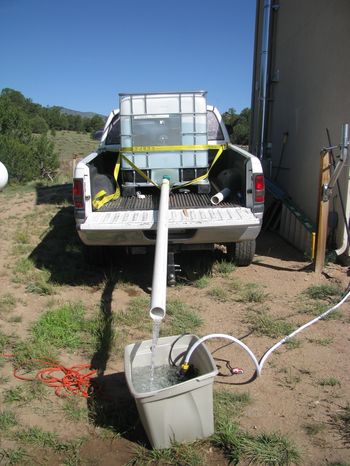 Fortunately, we had just installed the 500 gallon inside tank. We also have an emergency reserve 500 gallon tank in the shop (for emergencies just like this).  However, between the chickens, dogs, gardens, and household use - after 4 days we had to make a water supply run.

We happened to have a 275-gallon food grade tote on site. The town offers free water at the visitor center for RV's and such. When full, the tote weighs in at close to a ton, it was a fun drive back up the unmaintained mountain road.

Then came the challenge of transferring all that water from the tote into the inside storage tank.

We have an assortment of water pumps around just in case. One had a pretty good pump rate and an attachment for a standard water hose - perfect!  But it would not fit directly inside the large water tote.

Solution: use a length of 4" PVC pipe (have some of that laying around also) to gravity feed the tote water into a large plastic storage container.

Drop the submersible pump with hose attached into the storage container and the other end of the hose into the inside water tank.

Open the valve on the tote, turn on the pump and adjust the valve so the flow into and out of the storage container are about equal.

Between the trip into town and the transfer of water, this was an all day thing - for 275 gallons of water.  Makes you realize what a precious resource it is. 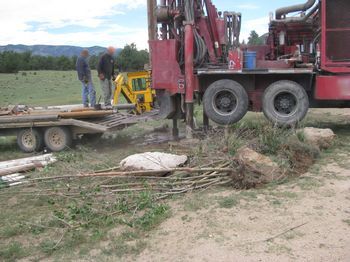 Then the drilling starts. We were starting from almost 200'. Went down to 300' - no water. Down to 400' - water but only at 2.5 gallons per minutes. Well drilling is expensive, but decided to have them go down to 500' to see if we could do better - Nope. Since they were already setup and had 3 bit extensions left on the quick loader, they went down another 60' without charging us.  We got to about 3 gallons per minute steady flow and called it good at that.

This was a major hit to our savings and in our confidence that we would always have a good water supply.

However, the static water level settled at 180'. The new pump is at 480' so we have a lot of water sitting on top of the pump and a steady flow of somewhat better than 3 gallons per minute - that's 4300 gallons a day - way more than enough.