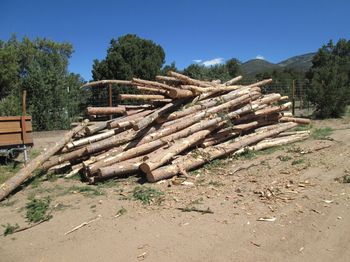 June 29th, 89 degrees - Preps for Winter Begin - Around here you can't just run down the street to get groceries or supplies as the needs arise - you have to plan way ahead.

We go through 5-6 cords of wood during an average Winter. Last year we paid for permits and went into the high country to cut down some huge ponderosa pine trees. I'm way too old for this stuff - I could barely move for two weeks after that venture. There are plenty of downed pinon pines on and around the homestead - but we are saving that for when its the only choice we have. We don't want to deforest ourselves into extinction like the residents of Easter Island.

Either way, the preps for Winter firewood have to start months ahead.  We try to have at least 8-10 cords split and stacked before Winter sets in just in case.  That is a lot of cutting, splitting and stacking! It's not a weekend job - it's a full day here and there over many months.

Somewhere on the site I mentioned the vast devastation caused by various bark beetles. They have left millions upon millions of dead trees all over the Rockies. The only upside to this is once the trees are dead and the beetles have moved on, you have a lot of standing firewood available for a reasonable price - and some companies even deliver.

We received such a delivery today - approximately 9-10 cords of Spruce - perfect diameter for our needs.  Now, as it cools down a bit, we start cutting it into 18" lengths, splitting and stacking. I knew that pop-up canopy I bought years ago would come in handy one day.