Yo Dude! My Feeder is Empty!

High Desert Homesteading > Blog > Yo Dude! My Feeder is Empty! 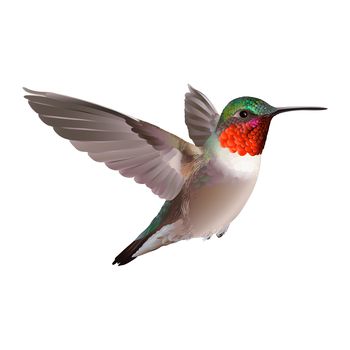 Being vegetarians, we consider the entire homestead to be an animal sanctuary. All are welcome (except when presenting a clear and present danger) and we try to make this a safe haven - a very small payback considering what we humans have done to the planet and the thousands of species we have caused to go extinct.

We have hummingbird feeders on the front and back decks - hungry little guys - we go through 5 lbs of sugar a week. During the height of the migration, its common to have 15-20 of them around each feeder.

Earlier on (like now) there is usually a single Alpha male that claims each feeder. He will let an unlimited number of females drink from "his" feeder - but won't let other males anywhere near the area.  He has several observation posts where he sits and like a lightning bolt, attacks any other male that gets close to the feeder.

For the most part, they completely ignore our presence, even when sitting very close to them.  However, the other morning the Mrs. was out of town and it was my job to make sure the feeders were full before the birds arrived for breakfast.  I was a tad late.

I walked out to the deck and Bam! The Alpha male was in my face hovering not 3" from my nose. I turned, he followed. At first I thought he considered me a threat - but why now? Then I looked over and noticed the feeder was completely empty and his harem had deserted him - NO WAY! No way he could relate the fact that it is me and the Mrs. th 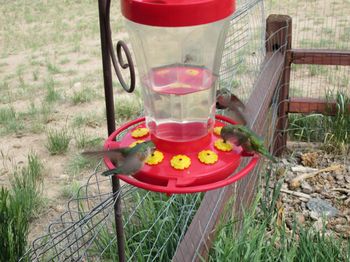 at keeps him beak deep in a bevy of beauties.

Yep, sure enough. I grabbed the feeder and he tried to follow me into the house. I filled it and moments out of the front door he was sitting on it drinking (while I was still walking). When he was satisfied that the liquid was the real deal, he flew back up to his post to stand guard. Within a couple of minutes his babes were back.

I have a bit of frustrated scientist in me, so I had to know for sure. For the next couple of days I would sit very, very close to the feeder - completely ignored.  However, when the feeder was low, I would empty it - BAM! - in my face. This prompted some research. Not that they are the "smartest" birds, but hummingbirds do have the largest brain mass to body size ratio of any bird - they proved that to me.

I shot the video below shortly after we moved to the homestead.